How to Build a License Plate Reader with alwaysAI

In this tutorial, we will cover how to create an app that will read license plates using the license plate detection model from alwasyAI and the optical recognition software EasyOCR. 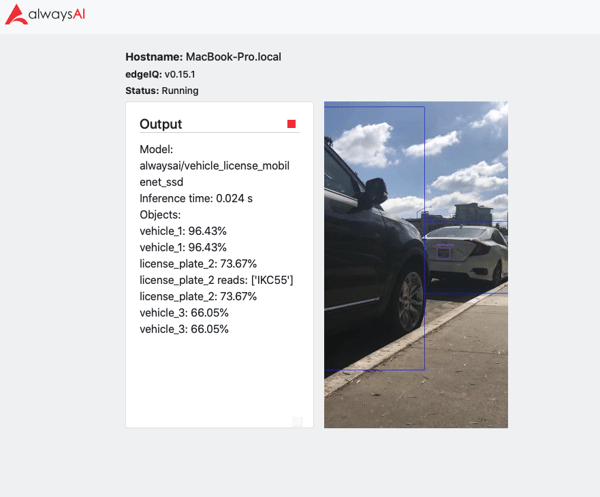 In order to successfully complete this tutorial, you will need:

Please see the alwaysAI blog for additional tutorials, tips for computer vision development and more. The finished code from this tutorial is available on GitHub.

For this app, we will be modifying the License Plate Tracker app. To complete this tutorial, first clone the code associated with the license plate tracker app, which can be found here. From within the newly cloned directory, run

and follow the prompts in the terminal. For this version of the app, you will need to deploy locally, as PyTorch does not work out of the box on ARM 64 architectures. Now you're ready to start!

In this app, we will be modifying two things:

Once you have the code imported from the License Plate Tracker App (which can be found here), we will begin to modify the app.py.

NOTE: in case you do not have a GPU or it has low memory, you may set the gpu=False.

2. Now we will look at adding the code that will read the license plate.
a. First we will need to detect the license plate and create a cutout image of it (this will produce a numpy array of the image):

3. Now that we have the license isolated, we can run it through the easyOCR method, which will take in a numpy array as well as the message format as parameters:

Before running, make sure to uncomment the set of dependencies that match the device you are working on.

After that, we are all done!

Sign up for an account to get started with computer vision today! For ideas on how to take your app to the next level, visit the alwaysAI blog. If you want even more control over your application, you can train your own license plate detection model to detect different types of vehicles and license plates!

Contributions to the article made by Jason Koo and Lila Mullany