In this article I will demonstrate how to easily modify existing apps offered with alwaysAI to use two object detection models simultaneously, and to display the output in side-by-side frames. 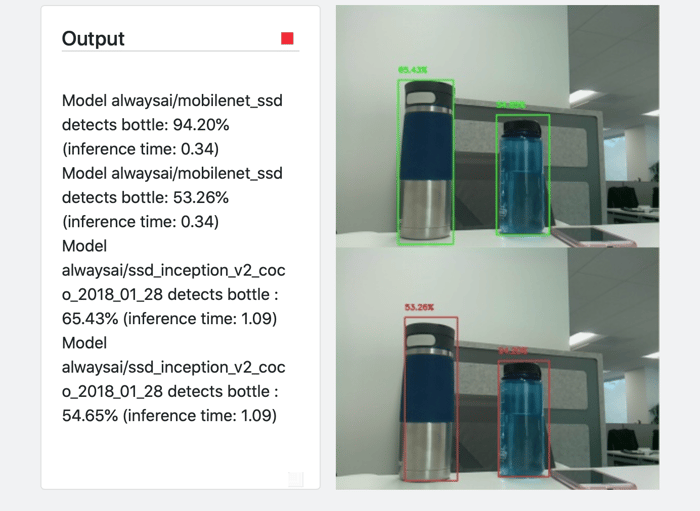 Before we get started, you’ll need:

To be clear, I am not referring to ensembling, which is when you integrate multiple less performant models to yield a more robust one, but rather combining two models with distinct output at the same time. This can be useful when you

Especially when building a prototype, this type of model combination can save a lot of time.

All of the finished code from this tutorial is available on GitHub.

After you have your free account and have set up your developer environment, you need to download the starter apps; do so using this link before proceeding with the rest of the tutorial.

With the starter applications downloaded, you can begin to modify an existing starter app to use two object detection models. The app that was modified for this tutorial was the ‘Object Detector’ app, so cd into the starter apps folder and into the ‘realtime_object_detector’ folder.

Since we added a new model to the app, we will need to add this model to our app environment by typing into the command line:

NOTE: You can change any model by following the ‘Changing the Computer Vision Model’ documentation.

Now that you’ve added your model to your app environment, you can begin to modify the starter app code. We’ll do this in the following steps:

NOTE: This is optional, but will make the differences in detections made by models easier to identify. If you omit this, there will be an additional line of the new code you should omit as well.

NOTE: this is almost identical to the original starter app’s code, but now instead of ‘alwaysai/mobilenet_ssd’, we just use ‘model’ to pull out the next model from the list.

Now, index i of the models list will correspond to index i of colors list, as well as index i of detectors list in the new code.

With the code as it is now, we can add a model to the ‘models’ list and the same initialization process will be completed for each model. The ‘detectors’ list will store the object detectors. NOTE: the colors list is in BGR format (not RGB!)

Now, add a ‘for loop’ inside the ‘while loop’ to loop through every detector in detectors. This will involve the following steps:
5.  generate a new image for each model:


6.  Below this, create an if/else statement to overwrite the input feed with the first model detected. This isn’t strictly necessary, without this step there will always be a plain video stream with no detection frames shown on the image.

7.  Reformatting the text for the output images.

This will make it easier to know which model is making which prediction on the output screen.

The final while loop code will look like this:

That’s it! Now you can build and start your app to see it in action. You may want to configure the app first, especially if you changed edge devices or created a new folder from scratch. Do this with the following command and enter the desired configuration input when prompted:

And once it is done building, start the app with the command:

Now open any browser to ‘localhost:5000’ and you should see the output illustrated at the beginning of the article!

We provide developers with a simple and easy-to-use platform to build and deploy computer vision applications on edge devices.